Back in February on the London Pentaho User-Group meeting I promised to make the contents of that presentation available as blog entries. This is the first of these three articles.

You can change the layout strategy of a band using the “layout” style-key on that band.

A canvas layout positions elements freely on the area of the parent band. Elements have no relationship to each other during the lay-outing. Therefore if an element expands its size, it does not push elements out of the way. Expanding elements always increase the size of the parent band.

The Canvas layout is the default layout for all new reports and bands.

If you are familiar with HTML and CSS, then think of this layout as a collection of absolutely positioned elements. 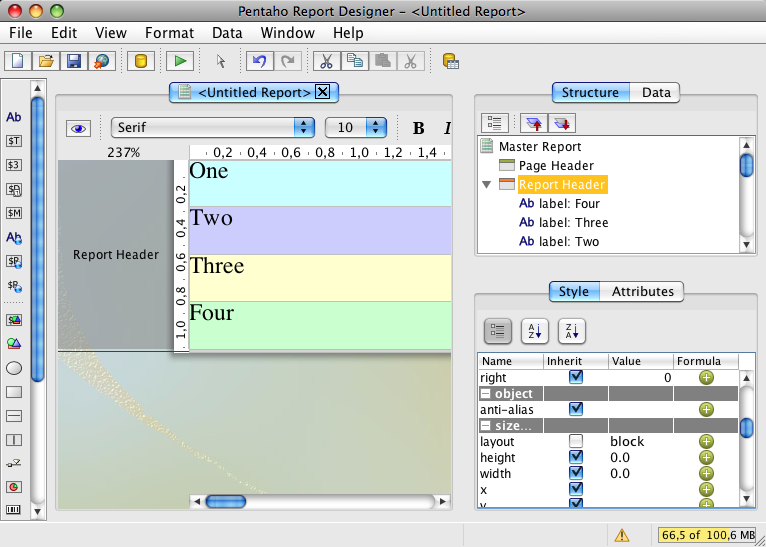 Elements in a block layout band are laid out one after each other vertically. Block-level elements span the full width of the parent band. If a element expands it pushes all other elements down so that no element overlaps the other elements.

Master- and SubReport elements as well as Groups are always laid as block elements.

If you are familiar with HTML and CSS, think of this layout as a set of 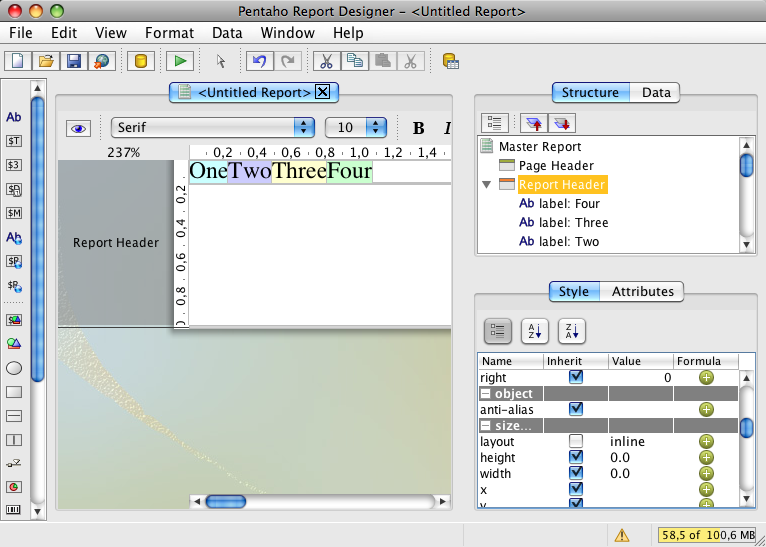 In an inline formatting context, boxes are laid out horizontally, one after the other, beginning at the top of a containing block. Horizontal margins, borders, and padding are respected between these boxes. The boxes may be aligned vertically in different ways: their bottoms or tops may be aligned, or the baselines of text within them may be aligned. The rectangular area that contains the boxes that form a line is called a line box.

A inline element that is placed in a non-inline layout band creates an artificial paragraph to wrap around this element during the lay-outing process. The most common use of this layout strategy is to produce rich-text content from several independent report elements.

If you are familiar with HTML and CSS, think of this layout as a set of elements. 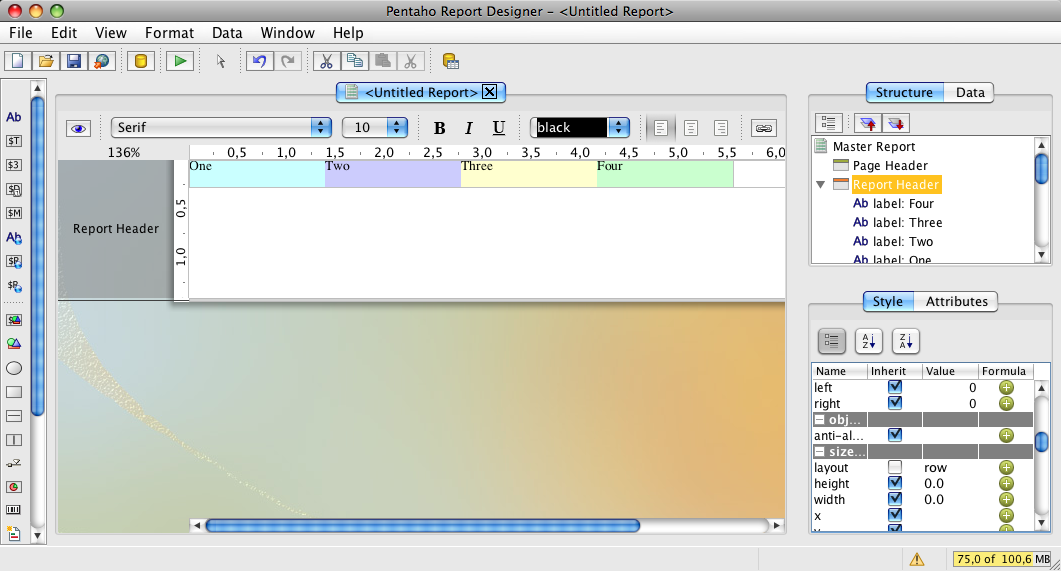 The row layout positions elements one after each other on the horizontal axis. All elements are printed in a single row, expanding their height as needed. If all elements should expand to the height of tallest element, set the min-height to “100%”.

Row-layout is a natural match for list reports, where multiple columns of data should be printed per row of data. When a element expands its width all other elements get pushed to the right.

If you are familiar with HTML and CSS, think of this layout as a HTML table with a single row of data.

When you use a row-layout for your list-reports, you will no longer need to layout elements manually. To create spacing between elements use either padding on your elements or place a empty band as padding element into the row layout band. The report design wizard makes use of the row-layout to position elements in the details band and details-header bands.

You can combine several layout strategies in one root element by adding extra bands to your report. All elements placed into these bands will be governed by the band’s layout setting.

How to avoid that dynamic-height elements overlap other elements

You can use this to avoid overlapping elements in your report whenever you use “dynamic-height” elements and to create proper table-rows so that elements of the second row get pushed down by the expanding content of the first row.

Use the following steps to create a two-row details band.

Download a sample report to see the row- and block-layouter in action.

This website uses cookies to improve your experience while you navigate through the website. Out of these, the cookies that are categorized as necessary are stored on your browser as they are essential for the working of basic functionalities of the website. We also use third-party cookies that help us analyze and understand how you use this website. These cookies will be stored in your browser only with your consent. You also have the option to opt-out of these cookies. But opting out of some of these cookies may affect your browsing experience.
Necessary Always Enabled
Necessary cookies are absolutely essential for the website to function properly. This category only includes cookies that ensures basic functionalities and security features of the website. These cookies do not store any personal information.
Non-necessary
Any cookies that may not be particularly necessary for the website to function and is used specifically to collect user personal data via analytics, ads, other embedded contents are termed as non-necessary cookies. It is mandatory to procure user consent prior to running these cookies on your website.
SAVE & ACCEPT